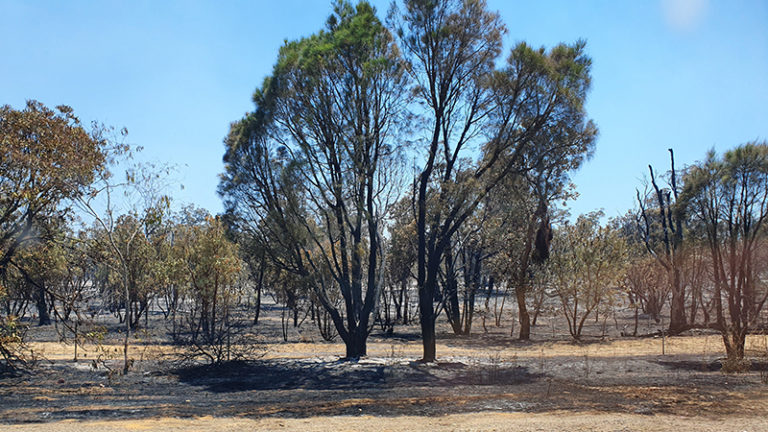 This Australian summer we are seeing a catastrophic bushfire crisis taking place over many months, which should appear to any open-minded and reasonably informed observer as being an unusual occurrence.

In the case of bushfires, there is a clear trend of decreasing annual rainfall in the south-east and south-western parts of Australia. Within that are trends that show rainy seasons starting later and finishing sooner.

This is what we’ve been seeing for a few years now.

The accumulation of greenhouse gases in the atmosphere is another trend that has been measured over a long period of time. Irrespective of the cause of this increase, there is clearly an historic correlation between this trend and the first two noted. There’s also an overwhelming body of scientific work that establishes causality, however to an extent that’s an irrelevance – regardless of how it happened, we must deal with the fact climate change is happening.

In the climate change conversation we’re all having, there’s much to be said for commentary that presents some issues that we are seeing as simply being normal one-off or cyclical processes of nature. Nature is complex and complicated.

I’m inclined to think in a similar way about human-induced climate change anyway – after all, we’re a part of nature and if we’re currently active participants in a mass extinction event (which may or may not include our own species) then ultimately nature will find a new equilibrium and those species that remain, and the new ones that evolve, will get on with their lives.

That doesn’t help us or our loved ones very much though, does it? It doesn’t protect us from the horrific thought of ourselves and our descendants enduring unimaginable suffering on a scale that would make the current natural disasters pale into insignificance.

Our natural desire for self-preservation as a tribe must kick in soon. Of course, for many people in the world, tribal preservation remains secondary to the daily struggle for personal survival – a closely related topic, but one that I’ll set aside for now, as social issues are potentially more complex to address than the environmental ones that sit in front of us.

What we can hope for is that there are enough humans who are able to prioritise survival of our species, who choose to prioritise survival of our species, and with access to enough resources to enact the change necessary for that survival. Perhaps a bushfire season such as we’re currently having in Australia is necessary in creating the shift towards achieving that critical mass of people and resources.

As the bushfires have rolled out (and in general over a longer period of time) I’ve noticed a lot of commentary, mostly from everyday people in conversation, social media, talk back radio etcetera, linking the fires to climate change and speculating on a wide range of potential solutions – Aboriginal burning techniques, regenerative farming, river health and other water management related issues, revegetation of cleared land and so forth. All of these practices are familiar to people undertaking on-ground natural resource management — whether they be farmers, local and state government agencies, friends-of-groups or landcare/rivercare/coastcare groups. This is the sector in which I have had the privilege of working now for the past couple of years.

It is clear that significant carbon sequestration opportunities exist both in revegetating cleared landscapes and implementing farming practices that capture carbon. This is not just a claim, it is supported by science, even that undertaken by the Australian Government’s own agencies. Some of these carbon capturing processes are integral to what is increasingly known as regenerative agriculture.

It is also clear that biodiversity maintenance is critical for holding moisture in landscapes – also a key outcome of landscape revegetation and regenerative agriculture. It’s clear that landscapes (natural or farmed) that are holding more carbon and moisture are both more resilient and less susceptible to extremes such as drought and flood – and fire. On the flipside, it’s pretty straightforward when looking at degraded landscapes to identify how we can get those landscapes holding more carbon and more moisture, and supporting greater biodiversity.

We’re also now at a point in our history where we can achieve this without any major shakeup to the social constructs within which we operate, and especially those constructs that occur in the fields of economics and accounting, and how they underpin public investment decision-making.

Until now, the natural assets of our landscapes have been ignored by these disciplines, which is ridiculous when you think about it. If my suburban home is surrounded by an insulating band of trees and bushes, I will spend less money on heating and cooling that home. Those plants therefore have an operating capital value. If my farm has more nutritious soil, I will need to spend less on fertiliser – again, that soil therefore has an operating capital value. As a concept this idea of “natural capital” is not new, however we are now at a point in history where commercial and financial (i.e. risk) applications of accounting for natural capital are becoming reality.

The implications of measuring, accounting for and most importantly creating new natural capital are, simply, existential for our society. The concept itself is not difficult for us to understand – we are used to assigning numbers and creating monetary value in many areas. A rock in the ground is “worth” nothing. A piece of ground where there is speculation of the presence of valuable minerals is worth more. And that “worth” continues to grow, from nothing, to the point where the mineral in its final refined and manufactured form comes with a significant price tag. So we have assigned worth out of nothing (although as an aside, industry does not even go close to paying the true cost of achieving that value).

In a similar way, we can take a plot of degraded farmland, analyse the contents of the soil and assign a value to that – to its natural capital. As we farm it from year to year we can continue to measure the contents of the soil and assess whether the natural capital is increasing or decreasing. This can be on the basis of the direct impact on farm-business measures such as inputs (fertilisers, water, biocides), productivity (importantly including nutrition quality), resilience to extreme weather (frost, heatwaves, windstorms) and drought resilience; or on the basis of market-based items including carbon credits. If the farm’s balance sheet is improving in part due to growth in natural capital (which can be specifically and deliberately achieved) the farm becomes a more sustainable business. This is the basis of regenerative agriculture.

Another example is a river system such as the Swan-Avon catchment, which is degraded. A system like this has potential to contribute more than it does to the economy of the communities for whom it is a central feature. Commercial fishing is one obvious opportunity. Property values on a pristine river are significantly higher than a degraded one that people can’t safely swim or fish in. Other industries including tourism and recreation can also thrive or not, dependent upon the water quality.

Like a farm, the river system can be measured and accounted for according to its natural capital. The issue of improving the water quality then changes completely in its intent and design as a business case – it’s no longer a cost to the community but rather an economic investment. The recently built Perth Arena sits on the banks of the Swan River – it was built with an investment by the community of somewhere around $2 billion.

Organisations like Perth NRM, where I work, and all of our friends in the natural resource management and landcare sector, inherently value and understand natural capital – even if they don’t call it that. Our business is fundamentally based around creating natural capital – ensuring that species’ and ecological communities are protected and supported; that water quality is monitored and improved; that biodiversity is encouraged in agricultural practices.

It’s not always about returning a landscape to pristine condition, but it is always about creating connections that allow movement between key habitats for native animals, birds and insects, because we understand that where these connections exist the natural capital of that landscape will be increasing rather than decreasing.

So as I hear my friends and acquaintances commenting on the various things that could and should be done, my thoughts turn to the sector that I work in. Which can absolutely achieve much of what needs to be done to mitigate climate change and its effects. Which brings with it a significant community of support (including over 10 000 regular volunteers in the Perth area alone), and economic opportunity including jobs and growth, but which is massively under-funded. And I think to myself, if we can bring to bear an argument that builds a business case, based on the creation and building of natural capital, then maybe the community might bring itself to invest in the environment and protect us all from catastrophe. In the way that the community can bring itself to invest in a sports stadium.

Or maybe the community could simply demand it – for all our sakes.

Join the Board of Management at Perth NRM