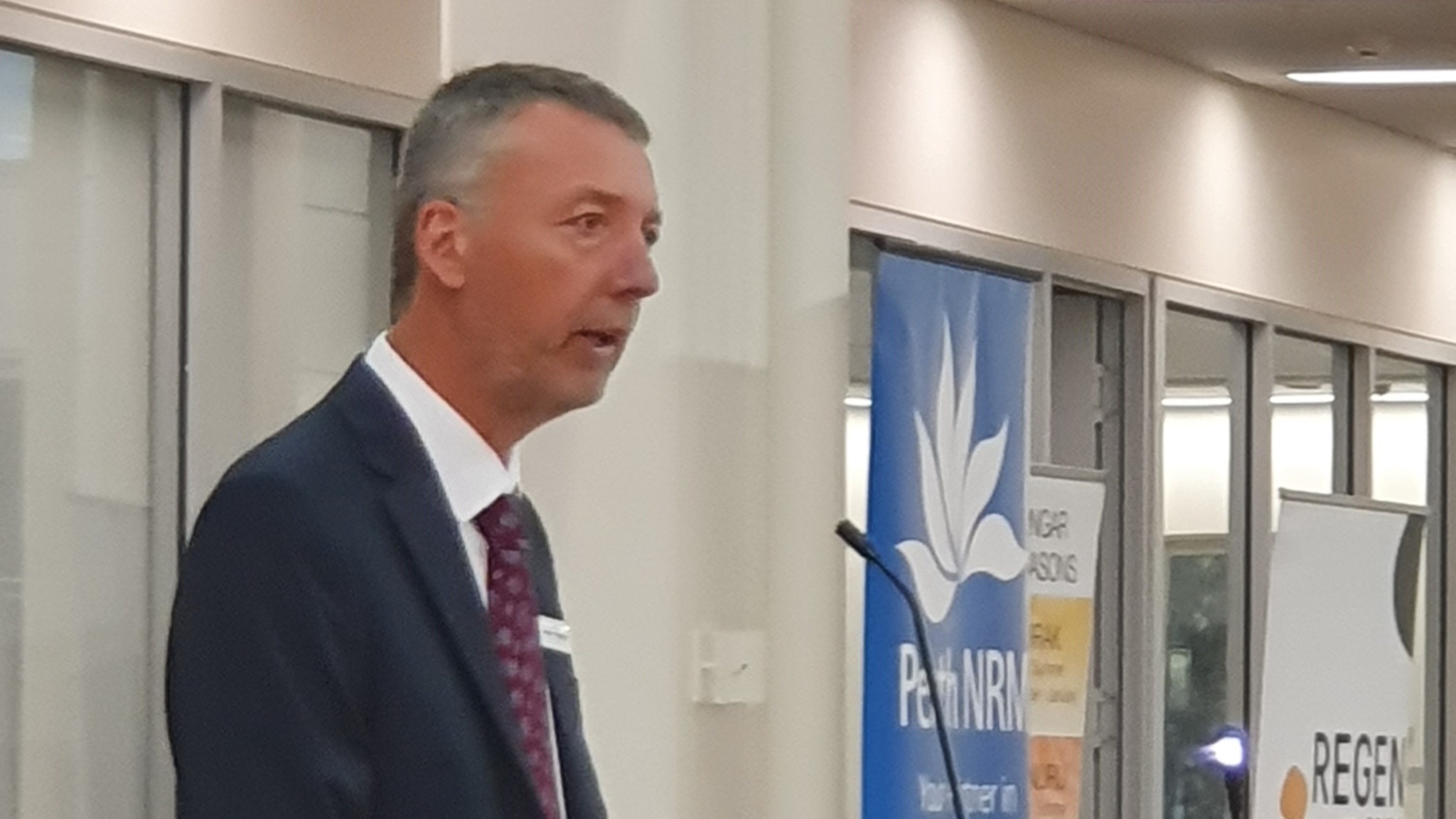 Perth NRM held its AGM on Wednesday, 30th October, with a public event to share its vision for 2050, The New Normal. The Vision has been developed to articulate the organisation’s hopes for a future that is aspirational and achievable.

Kerry-Ann Winmar gave the Welcome to Country address, gave a blessing and shared the story of the moodjar, known colloquially as the WA Christmas Tree [or Nuytsia floribunda], which flowers during Kambarang.

On behalf of the Board, Dr Bruce Hegge acknowledged the work of former Chair Mariyon Slany, presenting a gift accepted by her husband Torben, on her behalf.

An operational overview was given by CEO Paul Bodlovich, followed by a financial report presented by Board member Darrell Jones [see Perth NRM Year in Review 2018-19].

Perth NRM CEO Paul Bodlovich urged those in attendance to consider how they can participate in achieving the vision.

“Take the opportunity to see in your mind’s eye the vivid picture that we are painting. Understand that for the simple, and frankly, pretty obvious things we’re describing as having come to fruition, a whole lot of other things need to have gone right,” Bodlovich said.

“Imagine what those things need to be. And imagine where we need to be in 2029, which will mark the bicentennial of European settlement and the start of Perth’s environmental degradation. Think of what we need to do now to achieve our vision by 2050.”

It is 2050 and Perth is internationally recognised for its liveability and resilience in the face of climate changes and population growth. Our 3.5 million citizens access healthy and sustainably-produced food, enjoy a city which supports populations of native flora and fauna, appreciate the health of our water and soil systems which have continued to improve, and are blessed with a coastline that has maintained both its amenity and environmental values.

Perth’s remnant wetlands are healthy and ecologically functional and a healthy bushland is linked by a network of biodiversity corridors, some of which have replaced roads no longer needed due to the rapid uptake of electric autonomous vehicles. Households install and maintain novel habitats on their properties that support indigenous and endemic species as we ReWild Perth.

Indigenous mammals and birds are thriving in suburban and peri-urban Perth, providing a daily reminder that the natural landscape is resilient, functional and self-sustainable. Residents enjoy healthy Swan and Canning Rivers as the result of action within these catchments as well as in the Avon.

WA’s Food Security Plan ensures people are readily able to source food that is high in nutritional density, low in food miles, and grown in enriched soil as a result of improving farming practices being adopted throughout WA.

The Swan Region NRM Strategy successfully combines the cultural science of the Whadjuk Noongar people with western science and the knowledge and experience of the community. Public policy aligns with the Strategy and environmental and cultural outcomes are explicitly valued alongside social and economic outcomes.

People are no longer numbed to accept environmental degradation over time and generational amnesia has been reversed. The community expects environmental improvement in their lifetime, and actively contribute to that outcome.

Welcome to The New Normal.

The New Normal is intended to be a living document that invites critical engagement and participation, which is why Professor Peter Klinken, Chief Scientist of Western Australia, and Aboriginal consultant David Collard were invited to share their impressions of the Vision at a public, unmoderated forum.

David Collard had the first opportunity to respond to the Vision, respectfully challenging Perth NRM to engage more fully with the Nyoongar community.

“And that’s what I talk about tonight; the idea that if Perth NRM is prepared to join up and unite with the Noongar Nation of the Wadjuk people here, we would be more than happy to develop and strengthen that partnership in a way that’s never been done before… that change has to occur. Now.

“If we don’t do that, then the plan for that wonderful New Normal will be still excluding the Wadjuk science, the Nyoongar people being part of that. So I thank you, for this opportunity.” 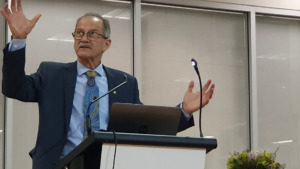 Next, attendees were privileged to hear a musical performance from Gina Williams and Guy Ghouse, filled with remarkable storytelling and honesty, including stories of the resilient bindi bindi (butterfly), and a Nyoongar interpretation of Moon River dedicated to Gina’s mother. The performance was both positive and vulnerable, inspiring an emotional response from the audience rarely seen at an AGM event. Professor Peter Klinken was obviously deeply moved when he took the stage to present his response to The New Normal, saying it was likely to be the hardest act he’d ever have to follow.

Professor Klinken then addressed the audience in Nyoongar, acknowledging country and Elders past, present and future.

“This is a very special moment for all of us. This is, I think, a key moment for us as a people coming together,” Professor Klinken said.

“As Chief Scientist, I get to see the most amazing things as a scientist, but I also get to see life. I get to see culture and I’ve been trying to learn a little bit of Nyoongar, because I believe language is a window to culture. I’ve been blessed by the people who have taught me and guided me on this journey.

“I’m really thrilled to see what the [Perth] NRM is doing here, because this is potentially the beginning of a new way. I have a saying, ‘I to I’; Ideas to Implementation. Ideas are cheap. Implementing them is the hard bit.

“What we have to do is take these really good, solid ideas and translate them into practical outcomes, so that when we look back – and our koolangka look back at us – they can say, ‘they got it right. This was their moment when they had to stand up, and they got it right’.”

We invite you to provide your feedback here.

_______
A note on the use of  Aboriginal language: Wherever possible, Perth NRM attempts to use the preferred spelling of the Aboriginal person or speaker sharing the story. As an oral language with many regional dialects, there is no standardised spelling, so there will be variation throughout the site. In other instances, Perth NRM defers to the terms and spellings suggested by Kaartdijin Noongar, a resource developed by the South West Aboriginal Land & Sea Council.

A quorum was achieved and David Lucido and Meg Anklesaria were re-appointed to the Perth NRM Board. Steve Vanstan is currently a temporary Board member following the resignation of Mariyon Slany in September. Dr Bruce Hegge, Darrell Jones and Pat Cesare are mid-term and remain Board members.

A motion was passed to change Perth NRM’s membership criteria to allow any organisation that aligns with our purpose to become a member, removing incorporated status as a prerequisite. These changes have been put forward to give our stakeholders greater engagement and participation with Perth NRM.

Perth NRM will make a public notice of these changes once the necessary processes have taken place.

Subsequent to the AGM, Dr Bruce Hegge was endorsed by the Board as Chair and Meg Anklesaria was endorsed as Deputy Chair.

The Board has begun a process to appoint two new directors, which is likely to take a few months.  Recruitment information will be made available in the near future.

Have your say on The New Normal: Vision for Perth in 2050