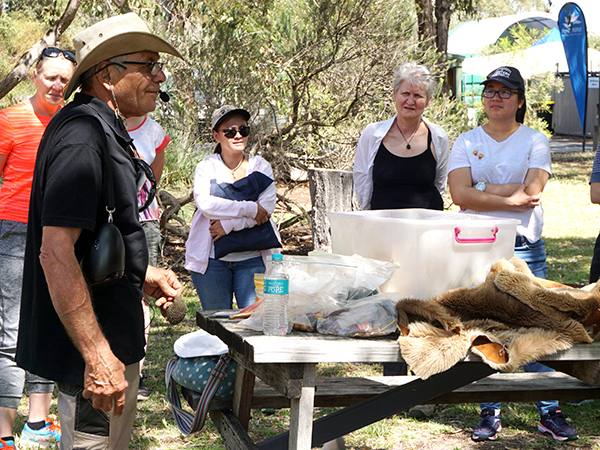 Kambarang is the season when the weather warms and the Perth region becomes carpeted in a rainbow of wildflowers.

On a Saturday set to be a scorcher at 40oC, Perth NRM and The Wetlands Centre Cockburn were joined by 16 volunteers looking to give back to the environment and learn more about Aboriginal culture from Noongar educator Leonard Thorn.

Leonard shared with us not only stories and knowledge on Saturday, but brought along an amazing selection of artefacts, bushtucker, and traditional tools. He spoke of how Noongar families moved back towards the coast during Kambarang, following the rivers and wetland chains as they travelled. They ate Gilgie (freshwater crayfish) and Yakkan (turtle) but understood that the Gilgie and Yakkan were essential to wetland health and ensuring that the water was clean and good to drink.

He showed us Yandi (traditional bowls) made from Jarrah and Morrol (Tuart) wood and explained how because the Morrol grew in wet areas the wood was best for carrying water and would not leak. When the group went on a short, guided walk Leonard stopped under a Boolkaala (Bull Banksia) tree and told how a drink made with the flowers were drunk only by men before corrobborees, and that the other banksia trees were used to make cordials for the children and women. He also told how during Kambarang the men would watch for the Condil (Sheoak) leaves turning brown, and that would tell them that the kangaroos were fat and ready to be hunted.

After the incredibly engaging information that Leonard shared, it was time to enter the Nursery and begin plant propagation. Denise Crosbie from The Wetlands Centre Cockburn spoke on the importance of soil disease control in the nursery and how they protect their plants to reduce the spread of Dieback Disease (Phytophthora cinnamomi). Denise then showed us how to carefully separate and replant the seedlings in larger pots, so that they could grow stronger before becoming part of restoration works around the Beeliar Wetlands.

The volunteers then worked diligently replanting the seedlings, before it was time to put down tools and enjoy a refreshing morning tea. The Wetlands Centre Cockburn rely on volunteers to help protect the wetlands and you can volunteer at the Centre on Thursdays and Fridays anytime from 9am to 4pm. For more information contact Denise at [email protected] or 9417 8460.

The Kambarang Talk and Plant Propagation activity was jointly coordinated by Perth NRM and The Wetlands Centre Cockburn as part of the Noongar Six Seasons Walks – facilitating Country and Culture connections project supported by funding from the Western Australian Government’s State NRM Program.

The next Noongar season of Birak will be celebrated at the Mount Flora Museum on Tuesday, 10 December. For more details or to register, visit https://www.trybooking.com/BGQFE.

Taskforce Workshop tackles money and sand going down the drain

Have your say on The New Normal: Vision for Perth in 2050