Smart Farms update for the North of Perth Food Zone 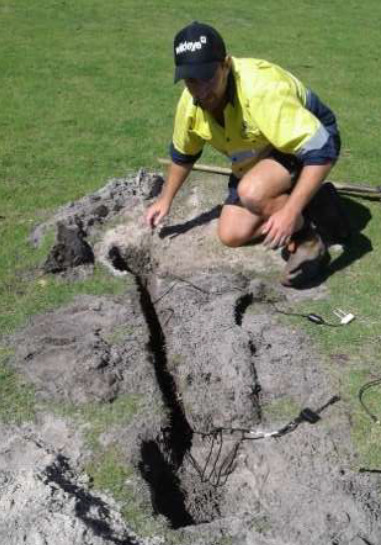 In 2018 the National Landcare Program and the City of Wanneroo funded Perth NRM to assess the practical use and adoption of improved soil water monitoring practices by horticulturists in the North of Perth Food Zone.

This project is supported by Perth NRM through funding from the Australian Government’s National Landcare Program and the City of Wanneroo, with the Department of Primary Industry and Regional Development, Wildeye and vegetablesWA.

In 2018 the National Landcare Program and the City of Wanneroo funded Perth NRM to assess the practical use and adoption of improved soil water monitoring practices by horticulturists in the North of Perth Food Zone.

Over the first six months of the project, the growers gained a better understanding of how to interpret trends in the data and the benefits and limitations of soil moisture sensing. Most growers involved in the study now view the soil moisture data regularly and use the information to program their irrigation. The overall response to the study has been positive and some growers have bought additional soil water sensors and installed them in other irrigation blocks on their properties.

At each site there are three sensors that are located at 15 cm, 30 cm and 60 cm soil depth. The top two sensors are within the root zone and the 60 cm sensor is used to determine the extent of deep drainage (overwatering).

Background
There are increasing pressures on the water resources in the North Wanneroo and Gingin areas with a hotter, dryer climate resulting in less natural rainfall combined with historic over allocation of ground water.

In January 2019, Minister Alannah MacTiernan announced a State Government proposal to reduce groundwater allocations to growers in the North Wanneroo area by 10% from 2028. If the proposed reduction occurs growers will need to adapt. Options include reducing their production area, purchasing or leasing water from other irrigators, purchasing water from alternative water sources, if they become available, or improving their water use efficiency.

These options either result in reduced production or increased costs to the grower reinforcing the need for support and further water efficiency programs to assist growers to adapt prior to the proposed reduction being enforced.

Research indicates that most fruit, vegetable and turf growers on the Swan Coastal Plain are not currently using soil moisture sensors or evaporation data to schedule their irrigation events. The growers generally make irrigation decisions based on subjective observations such as the appearance of the plant / tree, the feel of the soil, past experience and daily temperature predictions.

Properly designed irrigation systems, combined with the use of soil moisture sensors, improves irrigation efficiency and enables demonstration of responsible water use.

Field day
Initial results of the work with the fruit growers was presented by agronomist Neil Lantzke at an Avocados Australia Regional field day held Thursday June 6 on Cowalla Road at Wanerie that was well attended.

Future work – Recreational Areas and Public Open Space
During the project it was identified that the findings could be applied beyond the horticultural industry and an opportunity was identified to expand the project scope to include recreational, sporting and other public open spaces managed by local governments.

As significant water users, local governments face similar issues to the horticultural industry with increased pressure to improve both water and nutrient use efficiency in the management of their
extensive network of passive and active open spaces.

In spring 2019, soil moisture sensors will be installed at Kingsway Sporting Complex in the City of Wanneroo. This trial aims to use the learnings from the work undertaken with tree crop and turf growers and apply it to public open space. This will provide additional information to assist staff to improve practices, resulting in improved water and nutrient use efficiencies and potentially reduced costs.

If the trial is successful there will be an opportunity to replicate the project for wider adoption by other local governments. Additional funding sources are being explored beyond this project to extend the scope and work with other councils in the Perth metropolitan area.

Future activities will include field days and training courses with the view to increasing water and nutrient use efficiency in the sector.