Getting ready for winter planting: Can compost kick-start soil regeneration? 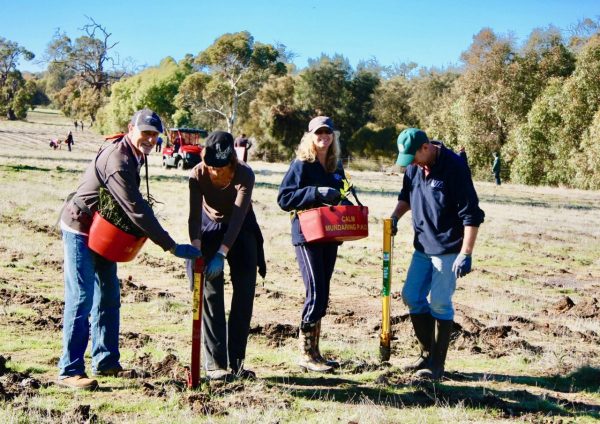 What is the best planting season for WA gardens?
This depends on what you are aiming to plant.  Autumn is often touted as the best time.  For native tree planters the last week of May to end of July is the best planting window for Perth as it is usually a time of regular, heavy rain.  For bush regeneration specialists who exclusively rely on rain to supply moisture to get plants started the timing is critical.

Home gardens aspiring to follow these techniques, would aim to start with small local area plants and wait till rain has soaked the soil down to a depth of 200mm.  While the bush regeneration industry expects to lose between 10 and 15%, getting even an 85% result is pretty good given there is no aftercare.

Why does autumn/winter-planting work so well, compared to spring?
Basically, the plant has as much as 7 months of mild conditions to establish a root system before our most difficult season, summer, comes along.

If you are able to irrigate your new plants then you can bring the planting times forward to early or mid autumn.

Most exotic plants also benefit from autumn planting mostly because of the long period for establishment.

I would recommend planting lawns in autumn too, however turf is planted successfully in every month of the calendar in Perth.  Summer planting involves a greater margin for error as far as watering goes, where winter plantings establish fairly slowly.

Deciduous trees and shrubs, both ornamental and fruit bearing, are best planted out while in a dormant state, which means July to August.

Tropical trees are best transplanted into the soil from October on, as the roots like to get moving in warm to hot conditions.

Then there are vegetables and herbs. There is a major split here based on preferences for warm to hot summer or cool, moist winter conditions.  You can start your winter vegetables as early as March.  For example, I like to get my garlic into the soil before the end of March.  Mine are already in and now I am waiting for the first shoots.  The major vegetable families for autumn winter planting include the onion tribe and the cabbage group, both European and Oriental types, as well as root vegetables generally.  There are lots more and this is a great time to home grow vegetables as Mother Nature usually does all the watering for you. 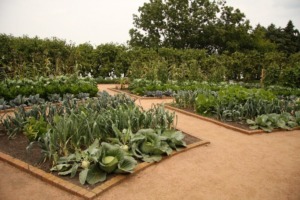 How do you prepare for planting?
Perth’s native sands are among the least fertile soils on the planet. That’s before developers get going on their site works, which removes most vestiges of life and native humus in soils.

Gardening practices can also have a negative impact on soil life, which is the real driver of plant growth.  Examples of this include the overuse of high nitrogen fertilisers, allowing soil to remain bare, ploughing or heavy cultivation of soil as this opens it up for oxidation of the vital humus reserves. The use of biocides such as weed-killers, insecticides and fungicides can have a devastating unexpected effect on this same soil life.

Soil science is one of the last frontiers of scientific study, which is ironic as the top 20 to 30cm of soil supports all human life, not to mention all other organisms that live above the ground.

New research is showing that the biodiversity of this under soil life is astounding with trillions of organisms existing in a bucket of healthy soil.  The linkages between plants and soil life are fundamental to the all life on Earth.

How does the plant-soil–soil life relationship work?
Plants are unique in that they can produce nutrients from minerals, air, and light in the process we know as photosynthesis. The plant produces simple sugars for its own growing requirements, but there is excess.

Most of this excess goes down into the soil through the plants roots to provide food for the soil living organisms.  These organisms, in turn, do everything to help their host plant grow successfully. This includes breaking down rock to provide mineral nutrients, seeking out and delivering moisture, repelling pathogens that might try to infect the host and even matching and supplying the exact nutrient requirements of the plant during its different stages of growth.

As gardeners we need to ask some new questions – such as how can we grow soil?

Here are a few things you can do – cover the ground with plants or at least mulch, try to eliminate biocides from your gardening practices, make your own compost or buy in ready made material.  One of the best ways of kick-starting soil regeneration and getting your garden prepared for planting is to add real compost. 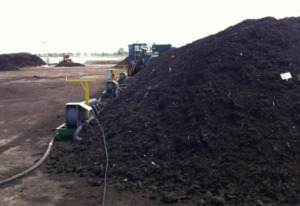 What is compost?
Essentially, compost consists of plant material and often animal manures that have been mixed and moistened and encouraged to generate heat. Air is a vital ingredient in the process so the system is called aerobic and this means usually that the mix needs to be turned or injected with oxygen to fuel the organisms that break down the material.

How long does it take?
The length of time the process takes varies enormously.  My static bin used mainly to house autumn and winter leaf fall took 9 months to be ready.  I have two Aerobins, which are also static but have an inbuilt lung, which kicks things along.  These still need 6 months to fully process and allow me to harvest a chocolate–like, cool compost material.

It can take hundred of years for soils to create humus from decayed plant and animal matter.  Humus, a form of stable carbon, is the powerhouse of soil.  It can stick around for a thousand years or it can be lost in a day through ploughing. Ploughing can release 150 tonnes of carbon dioxide into the atmosphere per hectare, of which most is oxidized humus.

How much compost do I need to add to the soil?
I recommend applying a layer one to two centimetre thick on top of the soil for lawn or vegetable planting.  Rather than vigorously digging this into the soil, which resembles ploughing, I would loosely work this into the surface using a steel nail rake.  For individual plants including shrubs and trees, remove the plant from its pot and use the empty pot as a measuring device.  Scoop up one or two pots full of compost to mix into the backfill soil before planting.

When we add real compost to soil, it accelerates humus production dramatically allowing soil to regenerate itself within a year.  Humus helps soil hold massive amounts of moisture as well as nutrients but the most dramatic effect is its role in stimulating soil life to help the plant grow successfully.